2002 I started searching the internet for another '67 GS 400 and came across this one outside Chicago. We went to inspect, test drive, and purchase the car in September 2002. We bought it, started driving it home, and 30 miles later it was overheating. The fun had started. After a stop at the closest gas station we could locate, new fan belts, and removal of the thermostat, we limped back to Ohio.
I had bought a project.
The car overall turned out to be solid, but tired in many places. Windshield replacement led to needed body work discovered in the lower window water trough corners. Of course, while at the body shop, the odd rough spot should be smoothed out...cha ching.
The headliner and upholstery needed replacing. The radio was not original, the antenna and interior finish items were in a box in the trunk. My Christmas list that year consisted of item numbers from Buick replacement parts catalogs

2004All winter was spent scraping the frame and undercarriage to bare metal. I reworked the rear suspension with new HR Parts N Stuff boxed lower arms, I boxed and poly bushed the upper arms. I bought a Poston GS113 cam & lifter kit, got a set of 430 big port cast iron heads and had them freshened up with a valve job and Stage 1 springs. I took the car to Norwalk for the 14th Annual Buick Raceday and had a great time.
I took the car to Rossler Transmission and had Carl install a rebuilt Turbo400 with a mild 2800/3000 rpm Converter. I spent the summer and fall trying to learn to drive it and got my best run of the year at Dragway 42 in October at 13.406.
A great year of fun and knocked "half a second" off my time.
I put the car up for the winter, with all intentions of completing a long list of things I wanted to fix.

2005 I never opened the hood until early April, as work and life was taking all my spare time. I bought a new engine wiring harness, and installed it. I bought a "Super Poly Front End Kit" from PST, and rebuilt the entire front end.
The car really handles nice now. I took it to Norwalk for the 15th Annual Buick Raceday, and got my time down to 13.27.
The car felt great. Launched nice, and went straight down the track!
I bought a new 750 CFM Holley double pumper, which helped bring out the engine's potential. A new set of taller & wider slicks helped bring down my 60' times to 1.85, which helped lower my ET. I finally reached the 12's. Wow, what a great feeling! I raced 2 weekends in late October & early November with back to back 12.93's and 105.89 mph. I put the car up for winter in mid November.
My driving also got much better this year, winning my fair share of rounds. I won "1" class trophy, and one 5' overall event winner trophy this year. You can see a picture of my trophies on the photo gallery page.
Great season, topped off by the news that my car was picked for the 2006 Buick Race Calender. I'm going to be Mr. March!

2006 I spoke with Mike T. at TA Performance, and he agreed to make me a set of small valve TA Aluminum heads. I installed the heads, and new TA Roller Rockers. What the heck, it's only money. John Zerucha ported and set up the heads, ready to bolt on.
I bought an 8.5 Rearend, new 3.90 gears and bearings, drum to drum rebuild by GM Jim Differentials in Richfield, Ohio. Nice guy, good work. I added new adjustable upper rear control arms to be able to adjust and set my pinion angle.
I took the car out in late April and ran 12.80, and was happy. The car needed a better launch, so I ordered a Coan 9" 3800 stall converter.
I drove the car to Norwalk for Buick Raceday and was running 12.73 @ 105.89. I managed a best ever 12.691 @ 106.57 mph in July at Dragway 42. I drove out to Salem for BPG Nationals, #4 piston disintegrated, and we came home on a rolloff carrier. My racing was over for 2006, and the work was just starting. I thought, "why not build a 439 CID?". Sounds different! (430 CID 0.045 + oversize bore)

2007 I spent the fall of 2006 talking to people I trust, TA Performance, John Zerucha, Joe & Jeff Miller of Miller & Miller, and Rick Gable of Gable Engine, discussing the why and how of what I wanted to do.
Voila, a plan was made. Gable Engine did the bore, align bore, deck, new oil modifications (per TriShield Performance), balance and blue printing of the components.
Dave at TA Performance was more than helpful in discussing options and shipping out all my parts. TA reworked my heads, wow, do they flow now!
Joe & Jeff Miller of Miller & Miller and Miller Racing (7.5 second Super Pro Olds) built the engine for me.
I took the car to the track Memorial Day and first run was an 11.84 @ 114mph. She flies! A few runs later and an 11.73 @ 115mph put a smile on my face Ajax couldn't scrub off.
I spent the summer driving to major events and racing. I drove 300+ miles round trip to BPG/Horsepower Nationals at National Trails and the 10 Grand Shootout at Norwalk [which is now Summit Motorsports Park]. I was getting quick enough that I needed a rollbar, thus losing some of my sleeper appearance. I ran an 11.44 @ 117.8 MPH Thanksgiving weekend, and put the car up for the winter.
I once again want to tip my hat to Joe & Jeff Miller. I would recommend them to anyone looking for a serious engine builder. These guys are good, damn good!

2011Hard to believe, but an old Vietnam chopper accident is ending my racing career. 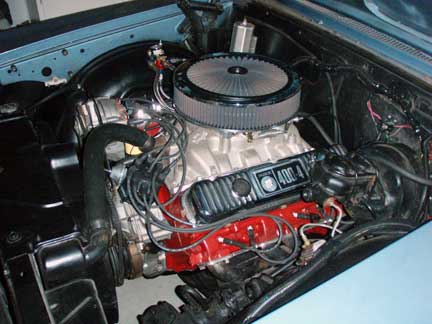